If you love someone with an addiction, come be encouraged – there is always hope! 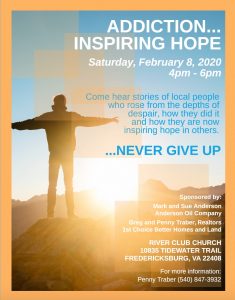 Read details about the event at the Free-Lance Star

The Fauquier Times ran a piece highlighting some of the reasons why this 5K is so important.  The race raises awareness to the lives we’ve lost to our addiction epidemic, and shares that hope and help are available.  Both my Joe and his friend Isaac were remembered and we are grateful their stories can be used to help others.