Journalist Randy Rieland highlights just how challenging overcoming an addiction can be.

Brian and Caroline Folker had always thought Fauquier County was a safe place to raise their two daughters. After much research, they had picked it as the place to live after his transfer from London to a job in Vienna.

But, it seemed like unnecessary cruelty to have Kathrine die not long after a stint in an addiction recovery center, after being buoyed by so much relief and hope. Through their terrible ordeal, the couple learned one of the awful realities of addiction. Most addicts relapse. Multiple times. Even after they receive treatment.

Kathrine had been in the Edgehill Recovery Retreat in Winchester for only two weeks when she left. She told her parents she was afraid she would lose her job if she stayed any longer. She also told them she would be fine.

“It turned out to be a perfect storm,” Ms. Folker said. “My anxiety-ridden, naïve, follower of a daughter, very easily influenced and living in a time and place when this epidemic hit. She might as well have had a bull’s-eye on her back.”

The Fauquier Times ran a piece highlighting some of the reasons why this 5K is so important.  The race raises awareness to the lives we’ve lost to our addiction epidemic, and shares that hope and help are available.  Both my Joe and his friend Isaac were remembered and we are grateful their stories can be used to help others.

Piedmont’s opioid crisis ‘has touched everyone’ 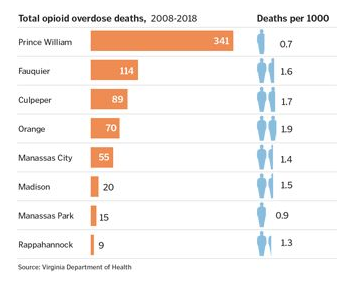 This is the first of a four part series by Journalist Randy Rieland, produced jointly by two independent, nonprofit civic news organizations, the Piedmont Journalism Foundation and Foothills Forum.

The opioid crisis has not just claimed more than 700 lives in Virginia’s Piedmont region during the past decade, but has also shattered families, taxed law enforcement and social services, stressed first responders and health care professionals and shredded the fabric of communities that never saw it coming.

And, for the generation of children being born to addicts, or into families with opioid abuse, some true ramifications may not be known for years.

A new hard-hitting short video by the Culpeper Police Department, viewer discretion advised, emphasizes the life-and-death nature of the ongoing drug crisis with its actual body cam footage of a man overdosed on a bathroom floor. Culpeper Police Captain Timothy Chilton is featured next, commenting on the “staggering” level of opioid overdoses in the last few years.

“The heroin crisis has certainly claimed many lives in our community and has forever changed many families,” states Police Chief Chris Jenkins. “The Culpeper Police Department is committed in our efforts to combat this deadly opiate public health crisis. We will continue to provide prevention, education and enforcement and use all available resources at our disposal to fight against this epidemic.” END_OF_DOCUMENT_TOKEN_TO_BE_REPLACED

When people hear that my son died of cocaine/fentanyl poisoning, many are hesitant to believe it.
“Are you sure?”
“That doesn’t make sense, one is a
stimulant and the other is a depressant”
“That must not be right.”
I’ve heard it all.

I was not there when Joe died, and I am no doctor, but I know this . . .
Joe’s toxicology results tell a story.
They tell a story of his last hours.
A story I have no other way of knowing because no one is talking – not to me at least.
This is all I have – the pure medical science of it.
A beautiful life condensed to a sheet of paper full of nonsensical numbers, sent to me in the mail by strangers who never even touched his body.

Did you know they don’t even bother doing autopsies on these deaths anymore?  Apparently,
the cost is too great – the backlog too enormous – the results assumably known.

Oh, that not one more will die Lord.
That not one more family with know these awful truths.
That is my prayer.  But I know in this fallen world – I ask the impossible.
So, I press on with awareness.  With speaking out at every opportunity.  Here is another awareness article from the Roanoke Times that I was happy to contribute to.
In memory of Joe,
but really . . .
for those still alive.

At first, Dee Fleming assumed her son died of a heroin overdose since that’s the opioid that’s been dominating the public’s attention. When she received the death certificate, she was surprised to learn that her son had died from a combination of cocaine and fentanyl, an opiate painkiller 50 times more potent than heroin and 100 times more potent than morphine.

After years of relatively stable numbers of cocaine overdoses in Virginia, in 2016, deaths increased 40 percent over the year before. In 2016 and 2017, fentanyl was implicated in more than 54 percent of cocaine deaths.

Read the full article by Amy Friedenberger at The Roanoke Times

ELKTON—Heather Starbuck is on a journey. A young woman from Colorado, she is now passing through Virginia as she hikes the entire length of the Appalachian Trail. Alone and far from home out here in Shenandoah National Park, the purpose of her journey gives her the strength and courage to endure the trail’s hardships. Heather is hiking the Appalachian Trail to raise awareness about opioid addiction and the precious lives that are being lost to overdoses every day.

And each lost life is precious.

Heather knows firsthand the devastating pain of losing a loved one to addiction. Her fiancé Matt died of a heroin overdose back in September. A mere six months later, she began this trek in his memory. There is no doubt that Matt is with her every step of the way.

Along the way, from Georgia to Maine, she is visiting various rehabilitation and transitional programs, and meeting with people who have experienced this same pain and loss—yet are working to bring change. Somehow, she found me on the internet as she was mapping out her trip, we connected, and I’ve been looking forward to meeting ever since.

I lost my 23-year-old son Joseph to an overdose of cocaine/fentanyl in October and started a Facebook group, Culpeper Overdose Awareness, with a goal similar to Heather’s, to raise awareness of the opioid problem in Culpeper and help find solutions. I was honored to join her for a small portion of her hike, along with my husband and some friends from the Restore Culpeper group. We met Tuesday at our planned spot, the Bearfence Trail, which has special meaning to my family. It is the last trail we hiked as a family before Joe died, and where we held a memorial hike in his memory.

On the trail we instantly fell in step with each other. Once perfect strangers, our hearts blended, each fully understanding the other’s pain and purpose. She talked about Matt and I talked about Joe. We discussed the shame and stigma that deters people from getting help, the mental health issues like depression and anxiety that often go hand in hand with substance use, and the need to see those struggling with addiction as sons, daughters, mothers, fathers – to see them as people who have value and are loved and needed.

Heather has created a nonprofit in hopes of “flipping the script” on how people struggling with addiction are viewed. The Matt Adams Foundation for Opioid Recovery gives grants for holistic rehabilitation centers and transitional programs for those on their path to recovery. Heather wants to not only spread awareness, “but more importantly, compassion and solidarity to those in recovery.”

Heather is an inspiration to everyone who hears her story or meets her along the trail. She refuses to allow things to stay as they are. Instead, she is spreading a message of hope, and sharing Matt’s story so that the wall of stigma that keeps so many people separated from treatment can be taken apart brick by brick. This cause she hikes for has given her grief a place, given it a voice. Under any circumstances walking the Appalachian Trail takes enormous courage and determination, but Heather has had to face some extreme weather conditions in Virginia with unprecedented amounts of rainfall, and high temperatures with a heat index of well over 100. But her cause keeps her going, giving her the strength to continue taking each step.

My hope for change is not as broad as Heather’s—my sights are only set on the community of Culpeper. Last year, Culpeper had some of the highest overdose numbers in the state of Virginia. Narcan is helping, lives have been saved and our number of deaths reduced, but it’s not a long term solution.

Access to treatment must be improved if we want to make any kind of progress. There are many barriers to treatment: cost, job loss, time away from family, lack of recovery facilities, but one of the biggest is the stigma they face. I don’t have the power to change most of those barriers, but I can help break down the stigma. We all can help with that. Addiction in our community has to become a normal part of our dialogue because like it or not, it’s affecting the lives of countless Culpeper families, and no solutions will be found if we continue to look the other way.

It might be too late for Heather’s Matt, and too late for my Joe, but it’s not too late for someone struggling right here today. And those are exactly the people Heather Starbuck is trying to help.

Her website: mattspurplebandana.org allows visitors the opportunity to track her progress, read the trek blog, and most importantly, to get to know Matt. It takes no time at all to recognize what a great guy he was! Heather’s journey is our journey. Because don’t we all want to help our fellow man and make our community a better place?

RAISING AWARENESS – BREAKING DOWN STIGMA – STARTING A CONVERSATION
That’s why I share about Joe, about his (unknown to me) addiction, about his death.
It’s not easy to say “my son used drugs”, but its necessary.  And losing two young men I loved within days of each other made it all the more necessary . . . .

REVA—A pair of boyhood friends in their 20s recently died from heroin overdoses within days of each other in Culpeper—a county that officials describe as being at the epicenter of the region’s persistent opioid scourge.

One young man, age 24, worked and had his own business, but had struggled with addiction before it took his life. He left behind a family struggling with the loss.

The other young man—23-year-old Joe Fleming, his friend since they went to youth group together—worked two jobs and had a family and friends who loved him, including his mother, who now wants to break the stigma of opioid addiction impacting families here and everywhere. Dee Fleming intends to cast a light in a dark place.

“I feel a deep burden to talk about these kids,” said the 47-year-old mother, wife and local librarian. “I feel like the more we talk about it and are open about it, the more somebody will say, ‘Yeah, I’m struggling,’ because I think there is such a shame attached to it. We just have to break that down and be willing to let this be a normal part of our conversations because it is a normal part of so many lives.”